Much of what is said by advocates of engineered longevity in the present day has been said before. It is, I think, very useful to read optimistic works written in the 1970s, for example, by people who went on to age to death just like all who came before them:

Wrong. Recent advances in gerontology (the science of aging, not to be confused with geriatrics, the treatment of the aged) have led many sober and cautious scien­tists to believe that human lifespan can be doubled, tripled or even extended in­definitely in this generation. If these researchers are right, nobody can predict your life expectancy. All the traditional assumptions on which the actuarial tables rest are obsolete. You might live a thou­sand years or even longer.

Of course, science-fiction people are just about the only audience in the country not staggered by the prospect of longevity. We've been reading about it for decades, and such superstars as Heinlein, Clarke and Simak have presented the subject very thoughtfully in several novels. But . . . longevity in this generation? In lecturing around the country on this topic, I have found even some SF freaks find that a lit­tle far out.

Well, consider: all aspects of research on longevity are accelerating and there has probably been more advance in this area since 1970 than in all previous scientific history. For instance, when I first wrote an article on this subject in 1973, the most op­timistic prediction I could find in the writings of Dr. John Bjorksten, one of the leading researchers, was that human lifespan might soon be extended to 140 years. But only four years later, in 1977, Dr. Bjorksten told the San Francisco Chronicle that he expects to see human life extended to 800 years.

Very similar in tone to something I might have written a year or two ago, isn't it? Robert Anton Wilson, Timothy Leary, and many others were aware of similar sentiments from advocates prior to their youth, but thought that they were fortunate enough to stand at the dawn of an era of longevity science. They were wrong, and they were too early. That and a moment's reflection should make you uncomfortable. Why are we advocates for longevity science any different from those who came before?

A diversion on the way to the answer: The Strategies for Engineered Negligible Senescence (SENS) could have been proposed in the 1970s, in a very similar way to their present form, had some determined fellow existed with the keys to research vaults and a great deal of time to assemble all the necessary insights. There would have been two fewer known modes of age-related damage, and more uncertainty over what was left to discover, but the same outline would exist. Here is the damage that causes aging, let's fix it. 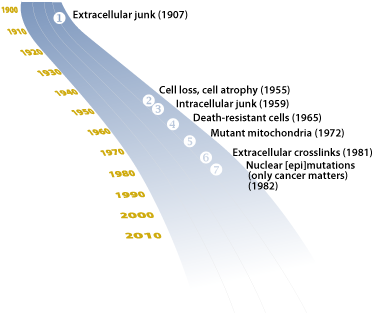 But in the 1970s, getting proto-SENS to work in mice would not have been a billion-dollar, ten year proposal as is presently the case. It would have required a far greater initiative, one to rival the space program or the formation of the NIH. In 2009 we live in an age of biotechnology and life science capabilities that is far, far removed from the rudiments of 1970. Work that today can be achieved by a single postgrad in a few months for a few tens of thousands of dollars would have required entire dedicated laboratories, years of labor, and tens of millions of dollars in the 1970s.

The advocates of 1970 who predicted engineered longevity in their lifetimes were wrong for two reasons: a) because the technology of that period, while advancing rapidly, would remain inadequate to the task for decades, b) there was no set of events likely to lead to the necessary (enormous) outlay of resources required to make significant progress in life-extending medicine.

Today, we can point to such things as successful efforts in the laboratory to safely replace all damaged mitochondria in living animals, for example. The Fight Aging! archives are rife with examples of the sort of barnstorming experimentation and success taking place in the life sciences over the past few years: cells reprogrammed, mechanisms uncovered, organs created, and so forth. We know that the present state of biotechnology is sufficient to make real progress in the repair of aging, and that this technology base is advancing much more rapidly than in the past.

Peering into the future is a fool's game, but I will say that if someone looks back at my online gravestone decades from now to say "too soon, poor fellow, too soon" it will not be because we lacked the technology necessary to defeat aging. Rather it will be because we failed to persuade enough people to devote enough resources to get the job done.

Having bumped into your site via some highly unusual holiday reading material, I have been looking you up for about 12 months now. There has been little that I disagree with, and I share your obvious frustration with the medical regulators, Big Pharma and the mainstream media. That the technologies you espouse will come into being is, to my mind, already an obvious scientific "fact", but the timescale is far from certain.
Well, what to do about the uncertainty and the inbuilt inertia against boat-rocking of this order of magnitude?

It seems to me that breaking the pro-aging trance of the general population is a task next-to-impossible. This is never going to be achieved with the medical establishment in control of the purse strings, and the population in a state of denial.

This is only ever going to get done through the conduit of some philanphropic billionaire with the desire to reach for the stars.

The good news is that, by their very nature, these type of people have a very strong desire to stick around to continue doing more of what they do best - that is building new empires in the face of all the doubters, the deniers and the bullshit.

Bottom line. What you (WE) need is somebody who can plunk down the odd billion or two with the potential to become the greatest gamechanger of all time.

I would have said Larry Ellison, but his aging research activities show that he stopped being "dangerous" years ago, and has slipped into comfortable respectability.

However, there must be somebody out there who just wants to tip over the biggest applecart ever. YOU JUST HAVE TO FIND HIM. The way you do this is to hightlight two things -

1. The wealth that would accrue to the holder of the intellectual property rights of the SENS technology. It would be the IT industry all rolled into one neat package. You would quite possibly be looking at the first global trillionaire.

2. Who wants to be THE MAN WHO CHANGED EVERYTHING?

That's your sales pitch - harnessing the latent desire to acquire or possess more than one needs and, at the same time, to be seen as the ultimate breaker of paradigms - the coolest kid in the playground.

Go back to 2005 in the archives and you'll find this post on the topic of which wealthy philanthropist to pitch:

those of us in our 40s and older I'm sure have pondered the idea that, after billions of years of evolution, the idea that we might miss out on engineered longevity by a few decades is more than a little hard to take.

then again, those in their 60s and older who are sure to miss out, are probably even more peaved.

it is what it is.

Thanks to your efforts and others, the snowball of public awareness is rolling and gaining momentum. Keep up the great work!