The best way to help everyone live longer, healthier lives is to fund research. The root causes of aging and all age-related disease might be brought under medical control within our lifetimes, just as happened for smallpox and other past threats. This is far from a sure thing, however, as the most promising research programs presently receive little funding. Yet we can change this state of affairs, and do our part to help end all frailty and suffering in aging.

It is now straightforward and easy for anyone to support the ongoing development of rejuvenation therapies based on repair of the cell and tissue damage that causes aging. How? By signing up to become an SRF Patron: join as a monthly donor at the SENS Research Foundation. Your charitable donations will help to ensure that effective treatments to reverse the causes of aging are developed sooner rather than later. Visit the SENS Research Foundation website to donate:

Your Donations Make a Real Difference

However you choose to support the SENS Research Foundation, your donations make a real difference! The charitable support of past years has pushed forwarded the state of the science and given rise to newly formed companies, working on the first rejuvenation treatments. Yet there is much more to be accomplished in the years ahead. We can help to speed up many important but currently lagging areas of work. For example, noted researcher David Spiegel works on breaking cross-links that stiffen skin and blood vessels with age. His team is supported by our donations through the SENS Research Foundation, and he sees first hand the difference we are making:

There is a revolution in rejuvenation biotechnology, and the pace at which science is advancing in this area is truly astounding. In particular, we're making real strides in developing strategies for undoing the damage caused by aging, and these are paving a path toward restoring youthful function to the human body. Such technological advances are within our grasp, and your funding for the programs at the SENS Research Foundation plays a critical role in keeping them moving forward.

The work of the SENS Research Foundation approaches the treatment of aging from the point of view of damage repair: certain well known and well described forms of cellular and molecular damage accumulate as a side-effect of the normal operation of metabolism, and together these cause all of the suffering and frailty of degenerative aging. If we can build the proposed means to repair that damage then the resulting treatments will produce actual rejuvenation: reversal of the signs of aging, prevention of age-related disease, and additional healthy and productive years of life. This has been comprehensively demonstrated in mice for the specific damage repair approach of removing senescent cells, for example.

The SENS Research Foundation, and its ally the Methuselah Foundation, have a proven track record in helping to move important rejuvenation technologies from the earliest stages of research to the point of commercial development. Your support goes towards programs that work. Funding is the present limit to progress in SENS rejuvenation research, however. Given that SENS is supported by many of the luminaries in modern medical research, why is it the case that these programs are not presently funded with billions by large institutions? The answer is that after a mere ten years of small-scale research for most of its programs SENS is still comparatively new, all change in the research establishment is painfully slow, and sources of large-scale funding are exceedingly conservative. Successes like the present growth in senescent cell clearance research and development have yet to sink in, or are not yet broadly recognized as an important, sweeping change in the approach to medicine.

Given this state of affairs, major funding institutions wait for other people to lead the way by forming communities and raising funds to carry out the initial proof of concept research programs. That means us - we are the leaders. We light the beacon and point other groups towards the best and most promising research programs capable of leading to an end to the pain and suffering that accompanies aging. As we succeed in strengthening the SENS research programs, others will join in to reinforce our success, just as happened for research into ways to remove senescent cells. This is how change happens in medical research: every friend persuaded and every dollar donated makes a difference.

The SENS Research Foundation funding has been critical to our work studying and developing methods to reverse the effects of advanced glycation end-products (AGEs) in aging. AGEs are non-enzymatic modifications that build up on proteins as people age, leading to inflammation and tissue damage. Early on, our lab focused significant effort on developing the first total synthesis of glucosepane - a major AGE cross-link found in human tissues - but we were unable to find funding from any of the traditional sources. The SENS Research Foundation came to our aid, and supported this research for over 5 years. In 2015, our glucosepane synthesis efforts were published in Science, and lay a foundation for developing drugs capable of detecting and reversing tissue damage in aging. We are deeply grateful to the SENS Research Foundation and Fight Aging! for all of their support and look forward to exciting, life-extending work to come!

In the year-end fundraisers running from 2013 to 2016, our diverse community of supporters stepped up to the plate to raise $900,000 for the SENS Research Foundation's programs - and this in addition to numerous crowdfunding initiatives for specific research programs. Challenge funds over the years were generously provided by Christophe and Dominique Cornuejols, Dennis Towne, Håkon Karlsen, Jason Hope, Josh Triplett, the Methuselah Foundation, Michael Achey, Michael Cooper, Michael Greve of Forever Healthy, and Fight Aging!

In 2017 the cryptocurrency boom led to millions in donations from high net worth individuals, such as the anonymous philanthropist behind the Pineapple Fund. In the year-end fundraiser that year, supporters of SENS rejuvenation research provided more than $5 million to the cause, all told. We live in exciting times! The better part of another $1 million was raised in 2018, $350,000 in 2019, and more than $2 million in 2020.

...and these Funds Produced Concrete Results

Past donors have seen the SENS Research Foundation programs that they funded take root and grow - donate today, and you too will see your support produce meaningful progress. Back in 2008, the SENS programs then running at the Methuselah Foundation directed donor funding to help support the work of the Corral-Debrinski laboratory in Paris in developing mitochondrial repair biotechnologies relevant to the creation of rejuvenation therapies. This was a success, drew in further funding, and by 2013 the company Gensight was founded to commercialize this technology for the treatment of hereditary mitochondrial disorders. Today Gensight is directing tens of millions of dollars in venture funding in order to supply mitochondrial repair therapies to the market. All that needs to happen next is to repurpose the resulting technology platform for use in aging. This is exactly the sort of result that can arise from a few tens of thousands of dollars spent well on early stage research, networking, and support.

As a further example, in 2013 the community raised $20,000 to fund cutting edge work in allotopic expression of mitochondrial genes, a potential cure for the issue of mitochondrial damage in aging. That was enough to have a skilled young researcher work on the process for two of the thirteen genes of interest over a period of months, and bring it to a successful conclusion.

At the larger scale, more SENS research is moving towards commercial development. In 2016 the results of a decade of work in the LysoSENS program, all funded by philanthropic donations, materialized in the form of LysoClear - a way to break down forms of metabolic waste in the retina that cause age-related blindness. This same program also produced technology to address some of the waste compounds relevant to atherosclerosis. A range of other programs are moving towards this goal of graduating from the laboratory and into commercial development. By 2019 SENS Research Foundation funded research programs led to companies such as Revel Pharmaceuticals to tackle glucosepane cross-link breaking, Covalent Bioscience to break down transthyretin amyloid via the use of catabodies, and Underdog Pharmaceuticals to prevent and reverse atherosclerosis by removing 7-ketocholesterol from the body.

Consider also that thanks in part to fifteen years of advocacy and support on the part of the SENS Research Foundation and its predecessors, clearance of senescent cells as a rejuvenation therapy has finally moved from being ignored by the research community to being a hot area of development in just the past few years. The SENS Research Foundation funded one of the laboratories working on cellular senescence for a number of years, and in 2015 helped to launch Oisin Biotechnologies, a company working on a best of class therapy to remove these unwanted cells. This is the sort of result we aim for when we support the SENS Research Foundation: to see previously languishing fields relevant to rejuvenation therapies take off in this manner, gaining large-scale funding and widespread support in a short period of time once the tipping point is reached.

Your donations make a real difference. 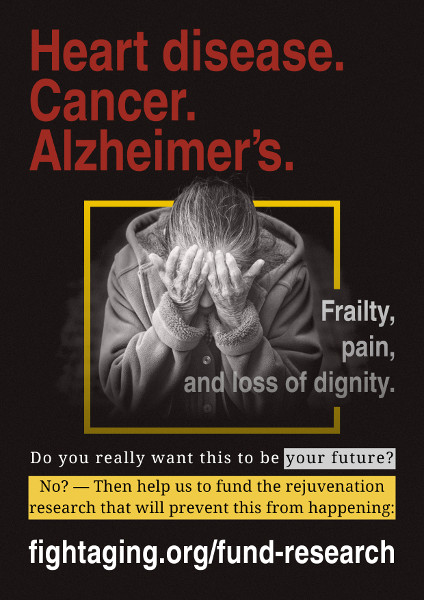 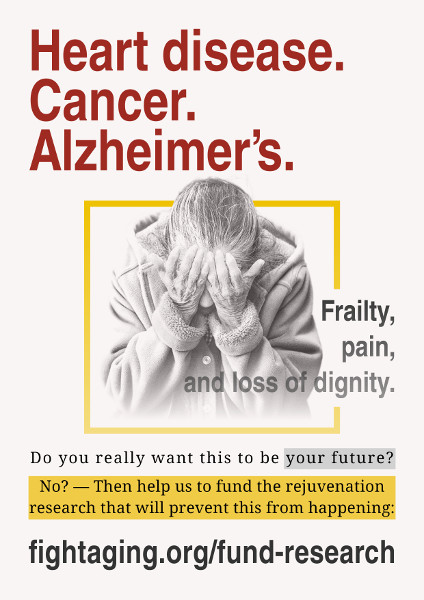 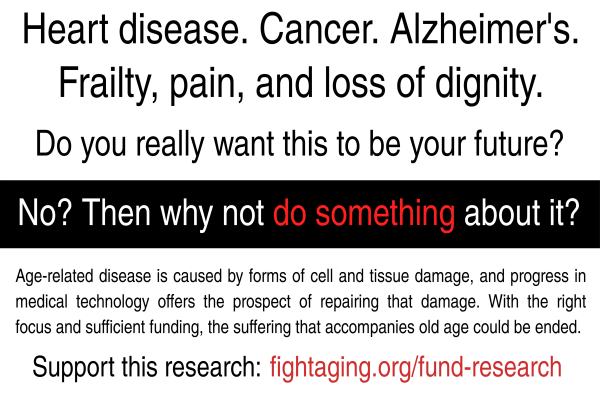 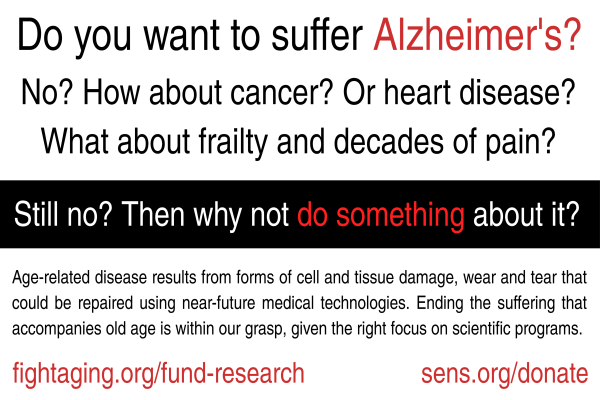 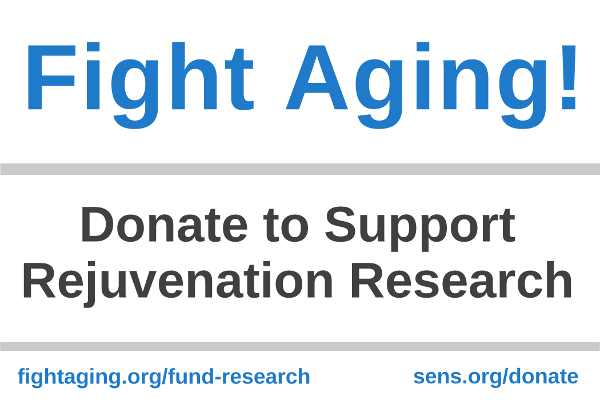 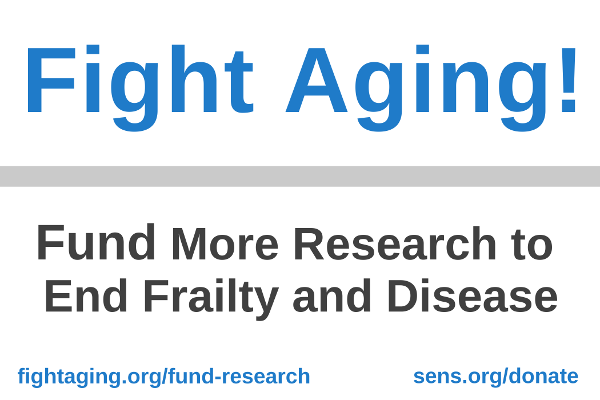 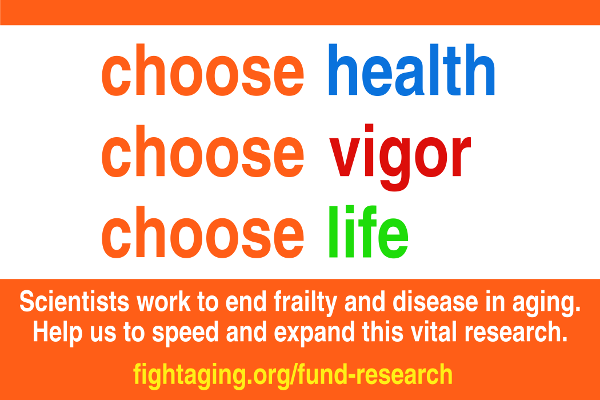 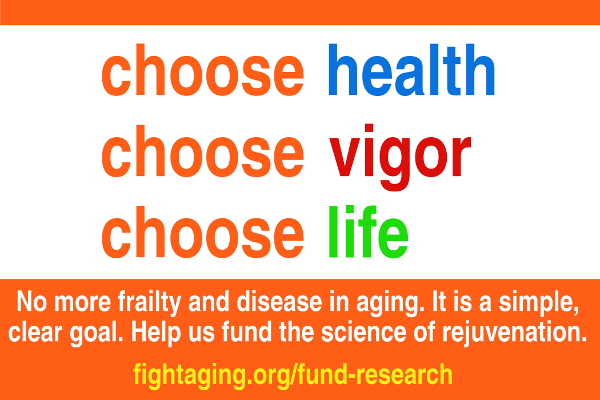