Aubrey de Grey and Michael Rae's Ending Aging: The Rejuvenation Breakthroughs That Could Reverse Human Aging in Our Lifetime is now translated into German by a volunteer team, and published through Transcript: 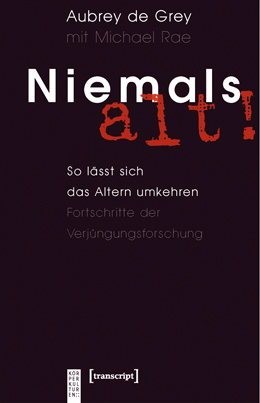 The title, as you can see is "Niemals alt!" - Never Old, or Never Get Old, or Never to Become Old depending on your chosen engine of translation. German sensibilities demand a dark cover for such topics, it seems. In any case, congratulations are due for the volunteer translators. As I remarked when the Russian translation became available:

translation of a scientific work is never easy, especially when its focus is on research that is still cutting edge. Much of the crucial terminology in new fields is essentially made up from whole cloth or built of unusual compound words that draw on language roots and traditions of nomenclature that English and Russian may not have in common. In addition, precision of translation is important, as positions of understanding are built up over many succeeding steps - an incorrectly translated early stage can render whole pages of information nonsense.

The same is true for English and German of course, though at least the languages have closer roots in tongues of antiquity. The translation is a challenging job well done, the reward being an expansion of that fraction of the global population exposed to the ideas and potentials of longevity science.