You should go and take a look at the donor list for the Methuselah Foundation. While the pace of large donations from high net worth individuals seems to have slowed these days, the steady influx of new donors from the public at large has picked up. The screen capture below is a representative slice of February, for example: 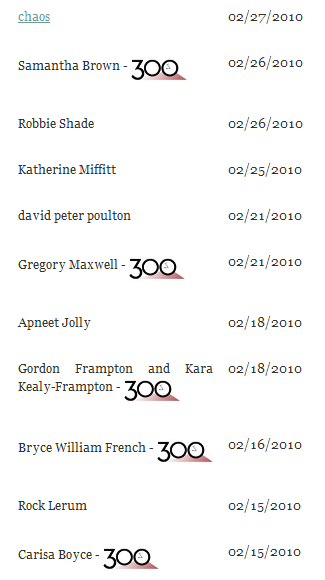 It's worth repeating that these are entirely new donors; folk from beyond the community of early supporters who dug deep to boost the Foundation's launch and sustain its growth in the first few years of operation. This view doesn't include the more than 200 people who are members of the 300, and who make recurring donations to the Foundation that average out to around $85/month each. You'll see from the graphic above that new members of the 300 are amongst the new faces joining the Methuselah Foundation community as well.

This, I think, is a promising sign. Broadly speaking, there are two ways to sway the world to your point of view: either convince the leaders and the crowd follows, or convince the crowd, and the leaders are carried along whether they want to be or not. Of course it's not that black and white in practice, and any organization speaks to both sides of the house. It's a bootstrapping process, with a little progress with the leaders here, a little progress with the crowd there, and a lot of feedback and communication taking place between all parties to muddy the waters. But the bottom line is that more new donors means that more people are hearing about longevity science and taking it seriously. Progress is underway.

On a related note, we should thank the Foundation for consistently going above and beyond the norm in terms of the level of transparency they provide for fundraising progress. They don't have to do it, but they do. Transparency, as I might have mentioned in the past, is the wave of the future in advocacy and fundraising for scientific goals, and this is the best foot forward.