Via Maria Konovalenko we are pointed to an updated English-language version of the PDF roadmap for regenerative medicine, a document assembled by the PhD-laden Russian volunteers at the Science for Life Extension Foundation. This is a work in progress, but it's pretty comprehensive on the scientific side - just the sort of thing to pass around to people not yet convinced that the future of tissue engineering is golden. 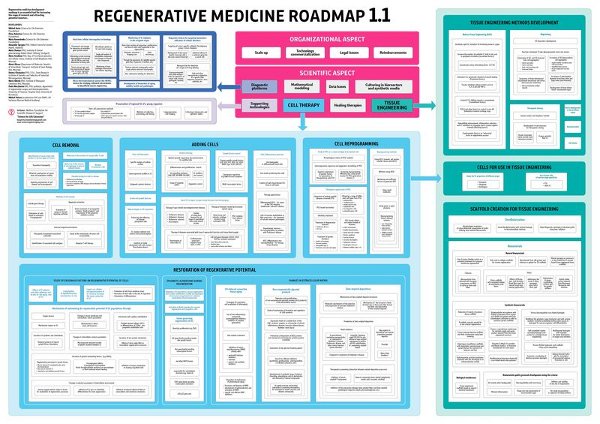 Here is the updated edition of the Roadmap in Regenerative Medicine ... Cell therapy and tissue engineering are described in more detail, than the rest of the scientific issues. I welcome everybody to take a look and add what's missing and/or what's wrong. I'd also like to notice that the organizational issues aren't described at all, but this is probably the most important part of the roadmap. There should be an implementational plan of how exactly the Roadmap should work included in the organizational part. To do that we need to address the specialists in the given fields.

But at least for now the question is - what's missing in the scientific part?

This covers the large areas of interest for cell therapies: (a) removing unwanted cells, such as the growing senescent cell population in every older body, (b) adding cells where they have been lost, so as to reverse sarcopenia, for example, or replace the dying motor neurons that cause the symptoms in a number of unpleasant degenerative conditions, (c) reprogramming cells to create unlimited sources of stem cells or specialized cells to order, (d) restoring the ability for cells to regenerate damage in the body, an ability gradually lost with age, and (e) the use of larger scale tissue engineering to create new replacement organs when needed.

There is a lot of detail hidden within all of these areas - even small sub-fields within regenerative medicine are sufficiently complex and fruitful to occupy many research groups for years on end. The end goal, however, is well worth the expense. Nothing on earth causes more economic harm than aging and degeneration. No feasible level of resources devoted to rejuvenation research could be thought too great when compared with the magnitude of the ongoing disaster that is aging.