The Science for Life Extension Foundation is a Russian organization consisting of advocates and aging researchers. They are similar to the SENS Foundation in that they undertake a mix of fundraising, directing research, organizing events, advocacy for longevity science, and publishing on potential methodologies to extend the healthy human life span. These two groups even share some members and advisors in common - it's a small world these days, after all, and aging research is not a large community to begin with. That is one of many things we like to see change over the next decade or two: if you want rapid progress, there need to be many researchers at work.

The Science for Life Extension Foundation has published a number of professional quality documents that can be downloaded in PDF format from their website. Unfortunately not all of them are available in English, and automated translation of PDFs remains somewhat hit and miss. I did want to direct your attention to one of the documents, however, which is entitled "25 Scientific Ideas of Life Extension." It is a very elegantly designed, very clear booklet aimed at investors. The PDF packages up a series of scientific research programs aimed at extending human life into compelling elevator pitches - but just saying that doesn't do it justice. It really is very well done indeed, and you should take a look: 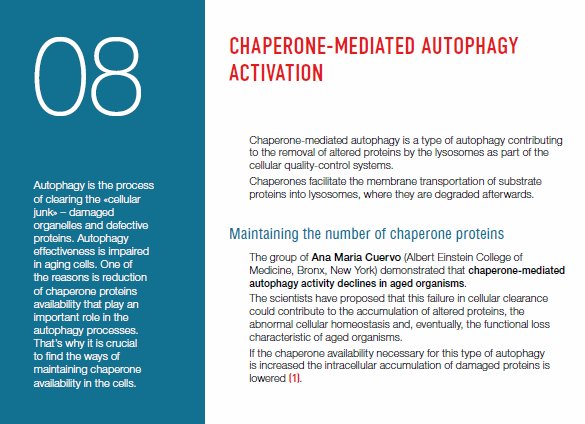 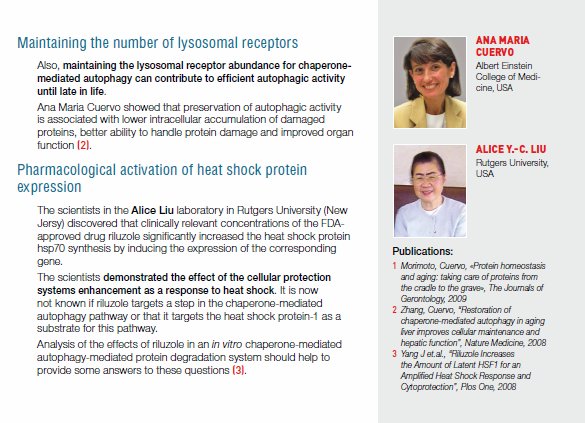 I picked out one of the twenty-five that focuses on a research theme you might be familiar with, as I've mentioned it in the past. If you look back in the Fight Aging! archives, you can read more about Cuervo's work on autophagy and lysosomal receptors:

In experiments, livers in genetically modified mice 22 to 26 months old, the equivalent of octogenarians in human years, cleaned blood as efficiently as those in animals a quarter their age. By contrast, the livers of normal mice in a control group began to fail. ... While her paper does not show increased survival rates among the mice, le Couteur, who has advised her recently on the research, says Cuervo does have data on improved survival rates which she intends to publish.