An article from the New England Journal of Medicine has been doing the rounds: it looks at some of the changing causes of mortality over the past century. These changes are signs of success in the progress of medicine and technology: both might be thought of as the search for ways to prevent suffering and death - one cause at a time. With each passing generation in a time of progress, some of those causes are largely eliminated, leading to a shift in focus and new targets. The degree to which infectious disease has been tamed is very clear from the graphics in the article, though there is always much more to be done on that front: 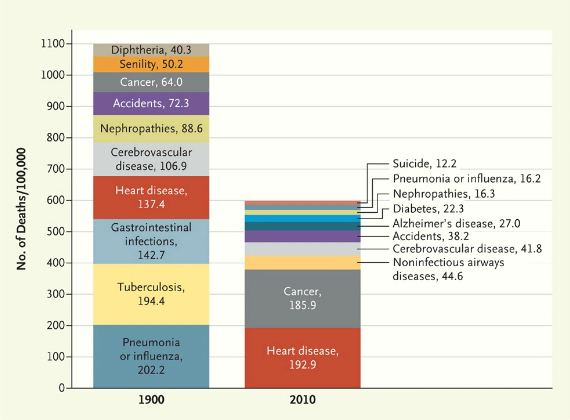 The article itself really isn't worth reading - the authors burble about policy without really saying anything, and certainly nothing meaningful is put forward. It's exactly the sort of thing you don't want to hear from people involved in research or medicine. If you can't clearly say "it's a priority to build new and better medicine, and we're working on a portion of that goal right now," then probably best to leave the conversation about medicine to other people. Here the peanut gallery has more to offer in the way of occasional meaningful comments:

The first thing to notice here is how much our mortality rate has dropped over the course of a century, largely due to big reductions in infectious diseases like tuberculosis and influenza.

On the large scale, medicine chases the priorities of the now - and in wealthier regions of the world that has become cancer and heart disease. The size of the cancer and heart disease research communities reflects the present degree to which the two groups of conditions contribute to human mortality. What it does not yet reflect is the new and more meaningful unified way of looking at the conditions that kill the most people: that they are all caused by aging, and stem at root from a limited range of mechanisms and changes that happen over the years as a byproduct of our normal metabolism. We rust, and that rust blossoms into a thousand different failure modes. Yet medical science is still largely focused on end states, and patching over catastrophic damage rather than preventing its origins.

To keep reducing the human mortality rate, the research community has to start in on prevention in the form of repair biotechnologies - ways to halt and reverse the earliest development of the age-related conditions that kill most people. It is as much a cultural change in the life sciences as it is a technical challenge, as the path ahead is fairly clear. This is why organizations like the SENS Foundation, mixing aggressive advocacy with targeted research work where few others are making progress, are so important. It is not so much that they will get the work done by themselves, but that they will spawn a sea change in the research community, such that many, many groups will tomorrow be performing similar work with similar end goals: to to be able to treat and reverse the course of aging.

You might think of a focus on aging and its causes as the germ theory of today's medical community: a unifying set of ideas and resulting research strategies that will bring the bulk of the medical community onto a better path forward, one that will lead to a more rapid improvement in the human condition, and longer, healthier lives for all.

I wouldn't be too confident about the 1900 numbers though. It includes a lot of guessing. For example, death by teething:
http://www.ncbi.nlm.nih.gov/pmc/articles/PMC1003127/?page=1