I noticed a good, comprehensible open access paper today: a review that summarizes what is known of the biology of the most common type of long-lived genetically engineered mouse species, those with disrupted or suppressed growth hormone (GH) activity. These include Ames dwarf mice, Snell dwarf mice, and growth hormone receptor knockout (GHRKO) mice. The present record for mouse longevity is held by the results of a GHRKO study, some of the mice involved living more than 60% longer than peers.

If you'd like to better understand how this all fits together under the hood and how it relates to other areas of study where metabolism, genetic engineering, and aging overlap - such as calorie restriction - then take a look: 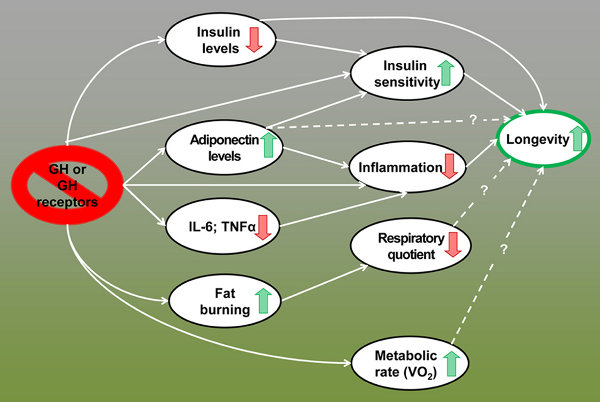 Data summarized in this article indicate that alterations in energy metabolism and improved insulin control of carbohydrate homeostasis have to be added to this list. In fact, these metabolic adaptations may represent key features of the "longevous" phenotype of these animals and important mechanisms of the extension of both healthspan and lifespan in GH-related mutants.

Importantly, many of the metabolic features of long-lived mutant mice described in this article have been associated with extended human longevity. Comparisons between centenarians and elderly individuals from the same population and between the offspring of exceptionally long-lived people and their partners indicate that reduced insulin, improved insulin sensitivity, increased adiponectin, and reduced pro-inflammatory markers consistently correlate with improved life expectancy.