Cryonics involves the low-temperature preservation of the recently deceased, and as an industry it has been around for some decades. Using modern techniques and if the preservation is accomplished with speed, this can result in a good preservation of the fine structure of the brain, and thus of the data that makes up the mind. There is a lot more to it than just the technology, however. Like all major medical procedures it requires considerable organization, legal, financial, and logistical, and much of the focus of a cryonics provider is on the work needed make such a one-time event, occurring on an unpredictable schedule and subject to the legal scrutiny of numerous government bodies, run as smoothly as possible.

A preserved individual has all the time in the world to wait on future advances in technology that will required for the task of restoring a preserved brain to new life in a new body. This isn't fantastical: it requires a mature molecular nanotechnology industry capable of producing and controlling complex medical nanorobot swarms, alongside the sort of control over cellular biology that we would expect to emerge later this century. A lot of serious scientific thought over the decades has gone into foreseeing exactly what would be needed for this task, and the only real issue is that this technology doesn't yet exist. People who are cryopreserved get to wait around for that to happen. People who go to the grave do not: they are lost and gone beyond all help, and it is a tragedy of staggering proportions that we live in a world in which cryonics is little thought of.

It was recently brought to my attention that the two cryonics providers in the US, the Cryonics Institute and the Alcor Life Extension Foundation, publish attractive modern business websites these days. In Alcor's case that is a recent update. If you want to find out more about cryonics, now is a good time:

We wanted to bring the appearance of alcor.org up to date and make it more appealing. We also wanted to improve engagement with visitors. This revision is a major cosmetic facelift. We will follow up with significant changes to the content, designed to help visitors find the information most important to them. We have also added a chat function. In just the first couple of days, this is proving to be a valuable tool for engaging website visitors and answering their questions. Take a look! 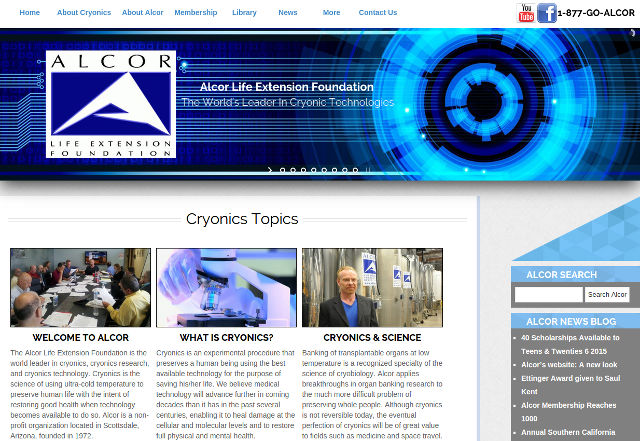 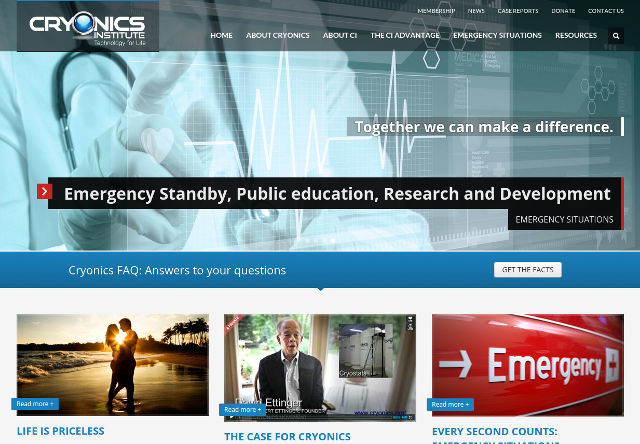 This is a sign of the times perhaps: cryonics as an industry remains out of sight and out of mind for most people, but it nonetheless receives more positive attention these days than it has in the past. The people involved in running providers and research groups in the industry are ever looking to move beyond the non-profit and grassroots origins of the cryonics community over the past 40 years to become more professional and more businesslike. The underlying technologies, such as vitrification of tissues, will become used more broadly in medicine for long-term organ preservation and similar needs in the years ahead, and the transformation of the industry from community effort to ongoing businesses will speed up.

That said, this remains a niche market, albeit one that in a just world would be much larger. Service providers are a hybrid form of company, one third a membership society with aspects in common with life insurance businesses, another third the provision of medical services for members that has a lot in common with acute critical care and all of its complexities, and the remaining third a specialist long-term biomedical storage facility. That is a mix that doesn't occur in too many other places in the business community: some hospitals, perhaps, but few other places.

All well and good, but even more than some other technological proposals this one is in need of a demonstration that they cam preserve the fine structure of the brain. Until they have preserved a mouse for an entire year and revived it without any ill effects this isn't that interesting...

@Jim: The Brain Preservation Foundation's prize competition is something to keep an eye on from that perspective:

It is worth noting that kidneys have been reversibly vitrified in the lab for some years now: