Immunosenescence is the name give to the age-related decline in effectiveness of the immune system. Some authors consider this to be distinct from inflammaging, the growth in chronic inflammation due to overactivation of the immune system in response to molecular damage and the presence of senescent cells, while others consider that chronic inflammation to be an aspect of immunosenescence. In today's open access paper, researchers review immunosenescence from the perspective of the adaptive immune system, here meaning detrimental changes in T cell populations. The contributing causes of these changes are given as (a) the atrophy of the thymus, (b) a growing bias towards production of myeloid rather than lymphoid cells in the bone marrow, and (c) the burden of persistent infection, particularly cytomegalovirus.

The progressive age-related atrophy of the thymus, known as thymic involution, may be the most important of these issues. Thymocytes created in the bone marrow migrate to the thymus, where they mature into T cells. As active thymic tissue is replaced with fat, the supply of new T cells diminishes. While the overall number of T cells remains much the same throughout life, these cells become increasingly dysfunctional due to a lack of replacements. Growing numbers of T cells in the old are senescent or exhausted, or uselessly specialized in large numbers to fight persistent pathogens such as cytomegalovirus. Ever fewer naive T cells capable of tackling new threats remain, and immune capability declines.

The importance of the thymus to immune aging is why, over the years, many research projects have sought to regrow and restore the thymus. Unfortunately none of these have yet resulted in reliable approaches in humans. Delivery of recombinant KGF was perhaps the most promising, given that it works very well to regrow the thymus in aged mice and non-human primates. The only human trial failed miserably, however, and no-one seems much interested in looking further into why this was the case. At the present time the closest approach to clinical application may that of Lygenesis: grow thymic tissue organoids and implant them into lymph nodes. I'm of the belief that upregulating FOXN1, a master regulator of thymic growth and function, is probably the best option, however. There is a long history of successfully achieving thymic regrowth via this method in mice, and the regulatory biochemistry appears to be the same in other mammalian species. 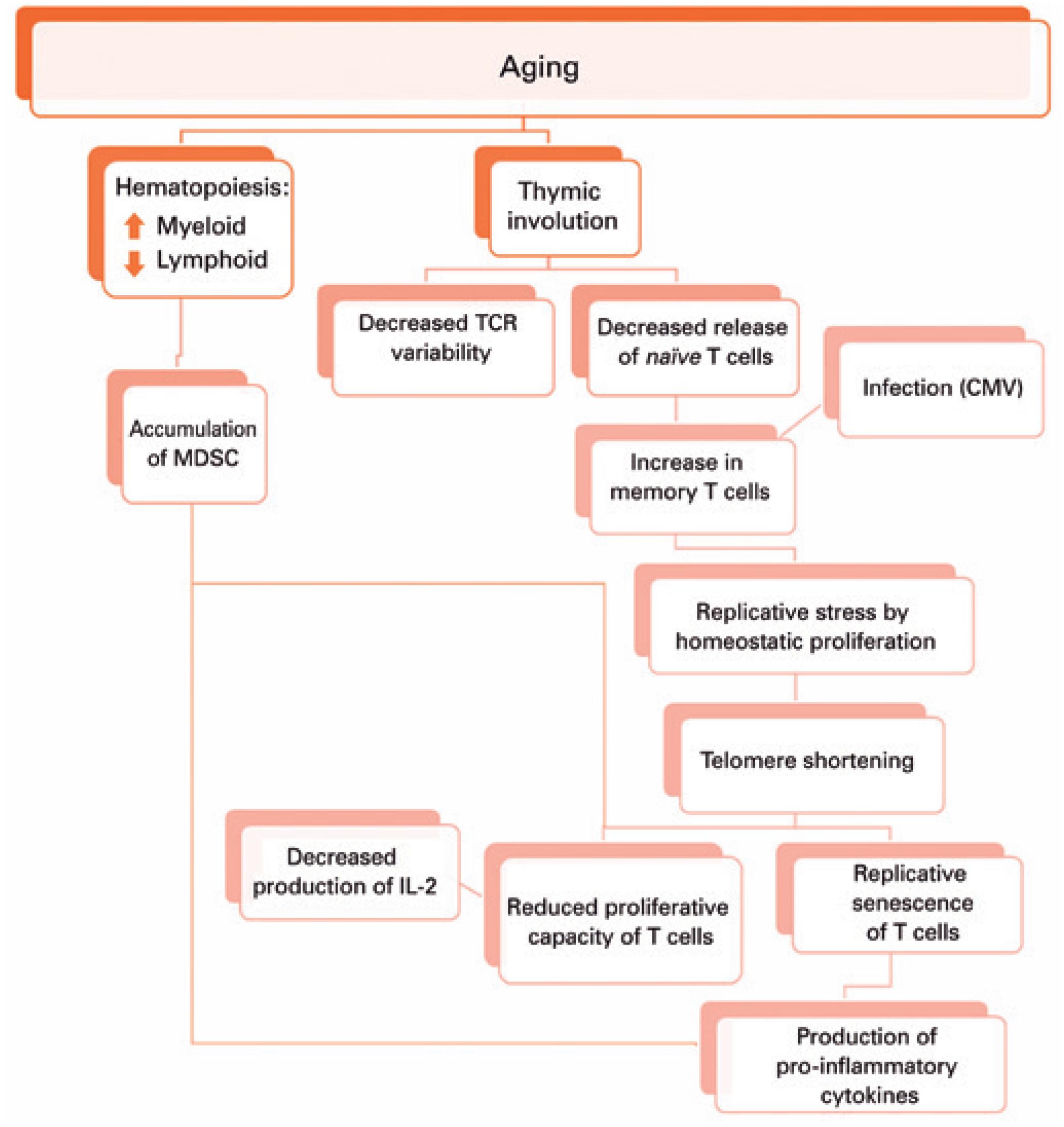 Immunosenescence was initially defined as a group of changes that occur in the immune response during the aging process. The reason for that is the immune system was believed to collapse with the aging process, considering the increased susceptibility of these individuals to infectious diseases and developing cancer, reduced production of antibodies against specific antigens, increase in autoantibodies, decrease in T-lymphocyte proliferation, in addition to thymic involution. However, immunosenescence is currently defined by some researchers as remodeling of the immune system, suggesting plasticity of the immune system in the aging process. According to these researchers, the aging process does not necessarily bring an inevitable decline of immune functions; what happens is a rearrangement or an adaptation of the immune system to adjust the body that has been exposed to different pathogens throughout life. Depending on how successful that rearrangement or adaptation is, senior individuals can reach longevity with quality of life or, conversely, develop chronic diseases (comorbidities) and/or be often hospitalized due to severe infections.

This adaptation of the immune system brought by aging seems to result in reduced number and repertoire of T cells due to thymic involution, accumulation of memory T cells from chronic infections, homeostatic proliferation compensating for the number of naïve T cells, decreased proliferation capacity of T cells against stimuli, T cell replicative senescence and inflammaging, besides accumulation of myeloid-derived suppressor cells (MDSC).

As we get older, during hematopoiesis in the bone marrow, the myeloid lineage tends to increase, which can favor the accumulation of MDSC. These cells are able to suppress T cells proliferation and function, and produce pro-inflammatory cytokines. Moreover, there is thymus involution and replacement of thymic tissue by adipose tissue. Hence, there is reduced T cell receptor (TCR) variability and release of naïve T cells. The decreased thymic release of naïve cells, together with the immune response against infections throughout life, lead to the accumulation of memory T cells. In elderly individuals, both naïve and memory T cells can be maintained thanks to homeostatic proliferation, which shortens the telomeres of these cells, resulting in replicative senescence of T cells that produce pro-inflammatory cytokines, and promote inflammaging. The shortening of telomeres also decreases the proliferation capacity of T cells, which will produce less interleukin-2, further decreasing the proliferation of these cells.

Considering T cells are essential for the adequate response against pathogens and neoplasms, and for protection after vaccination, it seems reasonable that changes in T cells quantity, phenotype, and function play an important role in immunosenescence. By understanding each of the mechanisms originated by remodeling of the immune system brought by aging, we could use the cells addressed in the present study (T cells and MDSC) as early and minimally invasive biomarkers for aging-related diseases. The aim is to minimize the limitations of immunosenescence and ensure better treatment for the vulnerable elderly population.