Kingsley G. Morse Jr. is one of the regulars at the Gerontology Research Group mailing list. He maintains a spreadsheet of all the life span studies in various organisms that he has been able to find, and is generally willing to sell that data at white paper rates, should you happen to be interested. He recently posted a histogram assembled from the study results, which I'm sure you'll agree is interesting: 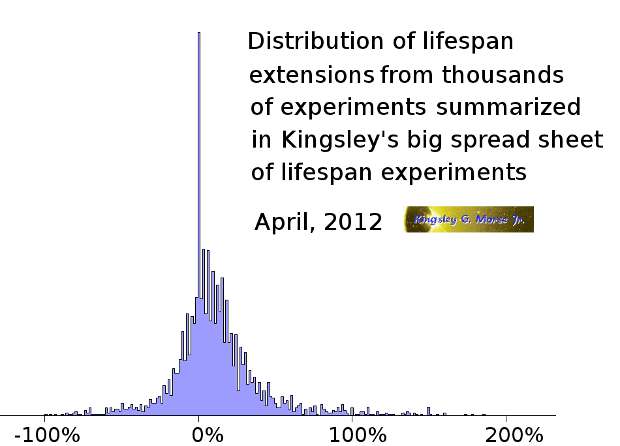 The history of working to extend life in laboratory animals - and of studying effects on longevity and mortality in humans - is largely a big null result. Other than calorie restriction, the effects of which were first formally cataloged by scientists in the 1930s, all of the excitement shows up in the past twenty years or so. The successes are a tiny fraction of the studies that showed nothing, or showed a result well within the margin of error, or produced results that could not be replicated. In mammals, mostly mice, the bulk of studies that do extend life significantly fall in to the 15% to 30% life extension bracket - on a par with moderate to severe calorie restriction. Only a few methods have been demonstrated to reach beyond that point.

To a large degree this is because near everything tried to date has been a form of metabolic manipulation - change the operation of metabolism to slow the effective rate at which damage accrues to the organism. I would be surprised to see any great improvement in the length of life lived by laboratory animals until the research community changes strategy to focus on actually repairing and reversing the cellular and molecular damage that causes aging. The difference between slowing aging and repairing aging will be as night and day when it comes to the practical results that can be achieved.

Any person seriously interested in life extension should be doing at least that. Those methods are proven to increase life and health span.

Therefore, to be useful right now, any other method should be developed to deliver results on top of nutrient rich CR and exercise. The control groups in any experiment must be CR + exercise individuals. It's useless (for me and other people implementing life extension) to know that the new method X or Y delivers 10%, 15% increase in lifespan vs. someone fed ad libidum. Even if the results are adjusted for calorie intake. Do these benefits apply to someone under CR?

I can't remember a single study to use CR + exercise as a baseline... Should I take Aspirin, Anti-oxidants, Rapamicin, whatever, on top of CR and exercise? Who knows...

If CR/IF work, why don't we see a bimodal distribution instead, with a hump around 30% life extension for the many CR/IF studies?

I would suspect that CR is the major cause of the higher bars in the slope above 0% in comparison to the slope below 0% - it was the case that few studies controlled for CR up until comparatively recently, and thus many interventions were accidentally causing mild CR.

But it should be noted that studies of CR itself are still a tiny proportion of all studies that report results on life span.